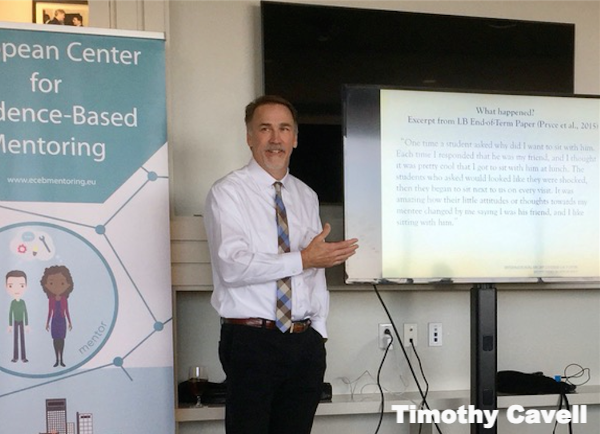 Gloria and Florian have summarized some of the most interesting lectures for the professional mentoring publication “Telemachos”, published in German by the “Berlin Mentoring Nework e. V.”. As the first contribution to this blog we present a translation of their summary of Timothy A. Cavell’s research as he presented it during the “Mentoring Learning Week”.

Gloria Amoruso and Florian Amoruso-Stenzel were guests at the “Mentoring Learning Week” in Boston at the beginning of October 2017. As part of a twelve-member delegation from Europe, they met there the concentrated expertise of renowned researchers and practitioners from the USA.

Gloria and Florian have summarized some of the most interesting lectures for the professional mentoring publication “Telemachos”, published in German by the “Berlin Mentoring Nework e. V.” As the first contribution to this blog we present a translation of their summary of Timothy A. Cavell’s research as he presented it during the “Mentoring Learning Week”.

It was rather surprising that Timothy A. Cavell war recently announced “Dr. Death” and that he was presented as a kind of annihilator of mentoring. Actually, the Professor of Clinical Psychology at the University of Arkansas is a very friendly man. In his research he deals with highly aggressive children, with victims of constant bullying and with methods that can help them to lead a good life. Mentoring is also one of his tools. He knows what he is talking about: After all, he was a mentor at “Big Brother Big Sister” for over five years.

The reason why a disillusioned listener gave him this nasty name nonetheless lies in the harsh criticism he has been voicing for a long time now about the prevailing mentoring practice and theory. Although he advocates of mentoring in principle, he can also come up with heavy artillery against it, such as these:

The dominant mentoring model established by Jean Rhodes, according to which the strength and length of a mentoring relationship lead to the best effects, is not correct, he says – at least not for highly aggressive children and victims of bullying. The relationship-oriented approach had been generalized and scaled far too early. This mistake was in his opinion a result of the famous study of “Big Brothers Big Sisters” in 1995, because it was carried out when mentoring was not yet sufficiently known.

How Timothy Cavell came to his criticism is an exciting story that is worth telling.

Together with his colleagues he wanted to explore the effects that close mentoring relationships have on highly problematic pupils of primary school age. The programme they studied was, according to Cavell, the most intensive and best-supported programme he had ever known: For a year and a half, volunteering university students were intensively prepared and accompanied to a one-on-one- mentoring-programme after school, with a focus on recreational activities. The parents were also involved, and even the mentees were familiarized with the programme.

But then a complication occurred, which ultimately proved to be helpful: The school management prohibited the formation and study of a control group that did not participate in the mentoring-programme. As an alternative, the researchers therefore developed a further mentoring programme that was to be downright ‘anti-relationship’, a complete contrast to Rhode’s model of connection and close ties.

This programme was called “Lunch Buddy”. The simple concept: Mentor and mentee meet twice a week for half an hour each, in a noisy, crowded school canteen in the middle of the meal service during school hours, together with other children at the table – by all means very unfavourable conditions for building up a close relationship. The “Lunch Buddy” programme also ran for one and a half years, but the mentors were replaced every three months. Furthermore, they received only a very short instruction and the parents were not even informed about this school activity.

But then there was a big surprise: In spite of the differences in the forms of relationships, both programmes had similar positive effects on the children’s conflict behaviour – even years after the end of the programme! Teachers and parents attested that all children had significantly changed their negative behaviour – no matter which programme they had taken part in.

This is a result that can hardly be understood with the current mentoring model. Cavell offers the following explanation: Children with high aggression potential or victims of bullying are in an outsider position. By sitting next to a “Lunch Buddy” at the table, they receive regular attention from an out-of-school person. This must have increased the curiosity and interest of the other children and changed their perception positively.  In any case, the outsiders are increasingly involved in the activities of the peer groups of other pupils.

This seems to be some sort of imitation effect: Because an adult is obviously interested in the outsider at the table, he or she becomes interesting for the other people of the same age. A general effect that does not require a deep connection between mentor and mentee.

Cavell says, these findings should have consequences. Science should see mentoring as a possibility for different positive developments for children and youths. Away from the dominant relation-oriented universal theory, towards small, diverse and verifiable theories that are more suited to the complexity of each situation.

In practice, Cavell also suggests a move away from the principle of “the closer and longer, the better.” Especially children with binding problems fall out of most mentoring programmes. However, the “Lunch Buddy”-programme proves that mentoring also works outside close and long-lasting relationships.

What is also fascinating: Cavell’s arguments are effective – above all with Jean Rhodes. The star mentoring researcher from Boston (who will also be attending the European Mentoring Summit in Berlin) explained before the “Learning Week” that she had changed her view on the basis of Cavell’s arguments, among other things. Rhodes writes that a basis of closeness and trust was naturally important, and training and support should work towards this. But she no longer believes that a deep emotional bond is the condition of all good mentoring. The problem was not so much that such ties are ineffective – in fact, they can be extremely helpful, especially for young people who are insecure and/or have experienced abuse or rejection. The point is, in her point of view, that these bonds aren’t always necessary.