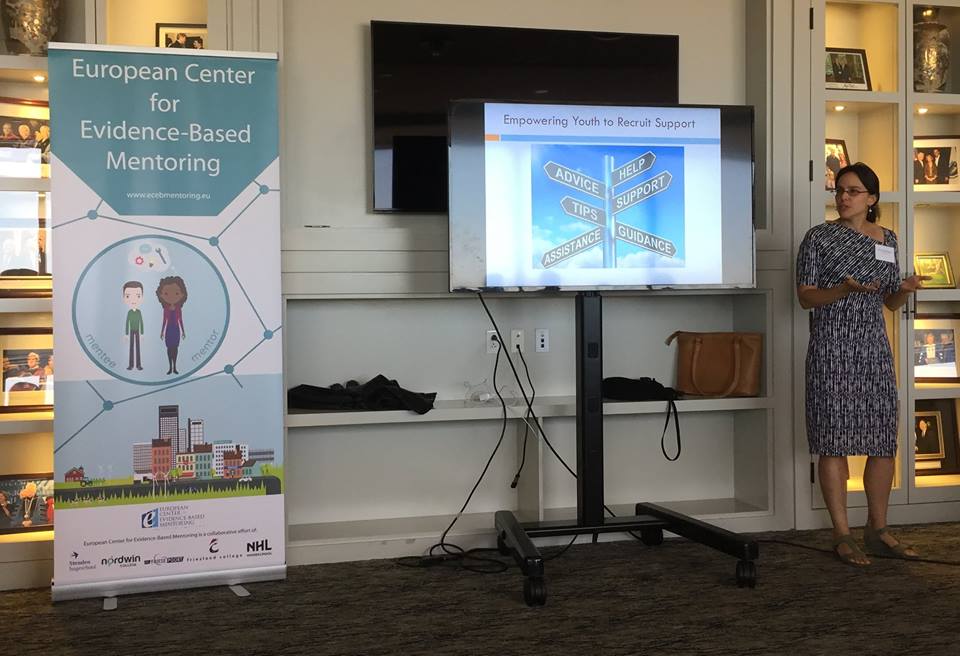 Gloria Amoruso and Florian Amoruso-Stenzel were guests at the “Mentoring Learning Week” in Boston at the beginning of October 2017. As part of a twelve-member delegation from Europe, they met there the concentrated expertise of renowned researchers and practitioners from the USA.

Sarah Schwartz, a lecturer in psychology at Suffolk University in Boston, has been doing research on mentoring for a number of years, when she learned about the new approach of “Youth Initiated Mentoring (YIM)”. Fascinated by this, she did not remain a distanced observer, but got herself involved in practice, e. g. in the development and implementation of trainings.

In order to understand the attraction of YIM, Sarah Schwartz says that the two well-known conventional forms of mentoring must be kept in mind. On the one hand, there is “formal mentoring”, in which relationships are initiated and maintained by coordinators. People come together would otherwise not have met each other due to social, geographical etc. distance. On the other hand, we find “natural mentoring”. This refers to mentoring relationships that occur unplanned, randomly, casually in a child’s or adolescent’s environment and that are usually not consciously perceived by the participants as mentoring or are even looked after by external persons.

Not surprisingly, these forms of mentoring are distributed very differently. According to Schwartz, only 3 to 7% of all mentoring relationships can be considered formal and 93 to 97% natural. In YIM, she now sees a mixed model of mentoring that contains proportions from both forms. The special thing about it is that young people take an active role in finding supportive adults from their environment, and they consciously shape the resulting relationship themselves as mentoring. Not a completely new idea, according to Schwartz. The beginnings of YIM date back to the early 1990s – but the approach was for a long time “under the radar” of mentoring science and practice.

Now, however, Schwartz sees the time for YIM coming and predicts its growing importance. And these are the reasons for that:

On the one hand, the practice of formal mentoring shows that adolescents are not easy to engage because interests, demands, expectations and the willingness to participate are much more differentiated than in children. They reject mentors much more quickly, they do not actively cultivate their mentoring relationships and they break off existing relationships more quickly. This could be different with a self-chosen counterpart who is more closely connected to their own world.

On the other hand, the first results of research in which Sarah Schwartz was involved, prove the positive effects of YIM. The evaluation of a programme aimed at middle school dropouts revealed that, compared to the results of conventional mentoring programmes, YIM’s relationships were not only more long-lasting, but also had better results: Many more YIM-mentees were studying towards a high-school diploma and intended to continue their education. Furthermore, they also had fewer problems with crime and drug abuse.

But what does such a programme actually cover in concrete terms? Sarah Schwartz uses the “Connected Scholars Programme” as an example, which is aimed at college students from non-academic and low-income families – a group that drops out of college more often than average. YIM consists of a training programme with eight sessions. The students first establish an overview of their existing network. In role-playing games, they test methods of networking and establishing contacts: How do I build up a mentoring relationship, how do I maintain it? In addition, the students are taught what opportunities can be associated with mentoring.

Schwartz is sure: “YIM is a promising, forward-looking approach, but it still needs to be tested in practice and scientifically supported.”